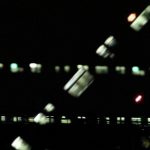 IF: How did this project start?
GC: Citylife II is a project that I presented when I was an NYU MA student. Here is the backstory of this art project: I connected with my fears at night when coming back home. The streets were eerie, dark, and I felt desolated. The sound and the lights of the trains were in the background. I decided to make the sound and lights the protagonists — main actors — in my project.

IF: When was it filmed?
GC: Citylife II was filmed for seven nights, winter 2013. I filmed while walking one mile around my home, capturing the edges. I felt as if I was conquering the night by discovering the details of the windows, the reflections of the trains, and the three levels of the trains in the overpasses of the elevated tracks. I watched and waited for the arrival and departure of the trains.

IF: What is your message?
GC: Citylife II is a project about space and time. Light remains one of my favorite topics. Why? In theory, nothing can travel faster than light. Light can go through spaces and can reflect things that are not there. In Citylife II, “light” and “sound” are the protagonists of this movie, wherein, the viewing person who is looking at the lights is never seen. This formation of the project allows the viewer to look through these eyes, the eyes of that absent, yet highly present person. Also important is the visuals of the trains. These trains — on tracks — were layered: one travelling on top of the other, via engineered rails, ties, and bridges. One focus: the little red light suddenly appeared when the trains were leaving. The entire scene, somewhat surreal, and personally fascinating: to observe the lights running in the sky through the train windows, in geometry and disappearing in foreshortening. The mood was dreamlike, yet, the entire week was not a dream. I certainly experienced, in CityLife II, time passing and the oceanic feeling of being one with the night.

🎬Hey Filmmakers from around the globe! 🌎 Aft