Born in a renowned medical family in Hong Kong, John’s father had a great aspiration for him to be a professional. However, he developed great interests in movies as his mother brought him to watch movies since age 4.

In 2015, John decided to leave his legal profession and began to pursue his long-dreamed career in acting and movie production. In 2016, he produces two short films with the unconditional love of a mother as the main theme. Through the two shorts, John wants to praise motherhood and convey the message of cherishing the family. He also wants to make the audience realize the importance of loving and caring for others instead of focusing on money and benefits. John also produced a feature film, Million Loves in Me with his partner. The film is about the real life experience of his client when he acted as a lawyer in Hong Kong. The film brought in different messages and feedback to the audience worldwide.

Million Loves in Me has produced more than 139 awards including Best International Feature, Best Actor, Best Actress, Best Supporting Actress, Best Cinematography and Best Original Screenplay to the team and cast of the film. John has also received 13 Best Actor awards to date. He has been treasuring all these achievements for himself and the team and has been expressing thanks to the judges and organisers of the film festivals which acknowledge his work.

Besides being the scriptwriter and producer, John also makes his acting debut in these two short films. In the near future, John will participate in the production of more feature films in terms of writing, producing and acting. With the dream to become an all-round filmmaker, he is going to pursue directing at the same time. In real life, John enjoys movies of different genres, especially those that could reflect the situations and issues of society, like ‘Thelma & Louise’ and Lorenzo’s Oil’ from Hollywood. They have inspired and shaped his style of filmmaking. In addition, Ang Lee is John’s favourite film director, and he finds both his early Taiwanese films and his recent award-winning works like & Brokeback Mountain and & Life of Pi truly amazing. John also applauds the outstanding acting of the famous English actor Daniel Day-Lewis, and admires Marion Cotillard for her performance in the movie “La Vie en rose”. Being a newcomer in the film industry, he sets participating in international film productions and performing alongside with renowned actors as his career goals.

Million Loves in Me 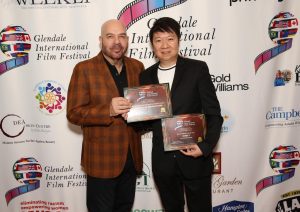