Rosita Clarke was born on the 2nd October in Dorchester, Dorset, England. From working class parents her father came from Dorchester and her mother came from The Hague in The Netherlands, Rosita was educated in the town at the local grammar school. She is married with four grown up children now and still lives in Dorset.

Rosita graduated from The Dorset Institute of Higher Education which was affiliated to Southampton University, with a B.ED (Hons) degree in English and Drama and took up her first teaching post in a secondary school in Crewkerne Somerset. And here started her lifelong passion for Drama where she was given the opportunity to assist in directing a stage production of Kes.

Soon Rosita gained her first Head of Drama post at a secondary school in Weymouth then swiftly moved to a Sherborne Comprehensive where her responsibility was to set up and run a new Drama department. From here there was no looking back and the school gained, over the twenty years she taught Drama and Theatre Studies there, an exceptional reputation for the quality of the school productions which she produced and directed sometimes with the help of the Head of Music.

Never afraid to tackle the exciting and challenging Rosita directed such dramas as The Royal Hunt of The Sun, The Crucible, The Bacchae and Metamorphosis and musicals including Oliver, West Side Story, Oh What a lovely War, and Les Miserables.

But it was when Rosita was producing and directing the play version of Sweeney Todd that she first used film in a live production. Some scenes were filmed out on location and projected onto a back screen. The Passion for Film was ignited. Then in 2008 she decided to actually make a feature film using students as actors and crew. She wrote her first screen play, an adaptation of Thomas Hardy’s Far from the Madding Crowd and presented the idea to the school. Once committed and with so many of her students on board Rosita shot the film on location during evenings after a full days’ teaching, at weekends and during holidays. In 2009 Far from the Madding Crowd made national and worldwide headlines with among others coverage from CNN and the BBC. Ben Hardy who then was a student of Rosita played Francis Troy and now with her continuing support and encouragement is working in Hollywood.

After retiring then from teaching to follow a career in filmmaking, Rosita set up her production studio I WILL Film. She was busy writing two screenplays A Shop Keepers Lot and Too Much Succulence Mr Hardy and made a film trailer for each of the narratives. Then in 2016 her website attracted the attention of Jim Burke (Writer) who wanted his short story called ‘Lost Love made into a feature film. And so there it was the second feature film made by Rosita Clarke was made The Other Side of The Lake which drew on the support of her friends, ex drama students and family who all shared enthusiasm for the project. Self-funded The Other Side of The Lake was made on a budget of just £10,000. With no financial backing or film expertise Rosita had to edit the film herself too. It took over a year to make but at last the film was launched in 2017. To date it has been re-edited and received an award from the London Film Fest 2020, Best Editing of a feature film, and has now been nominated for Best Set Design, Best Costume, Best Original Screen play and much to her delight Best Director.

Rosita is now working on a third feature film writing the original screenplay herself of course. 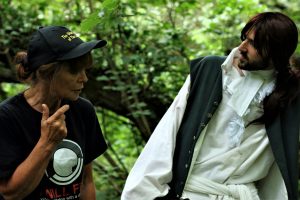